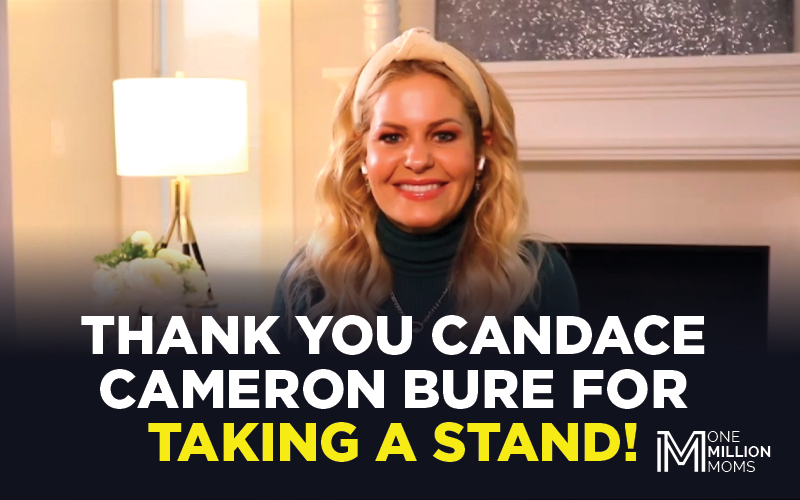 One Million Moms wants to take this opportunity to thank actress Candace Cameron Bure for taking a stand for traditional marriage while also standing boldly for her Christian and conservative values. Currently, Bure is enduring persecution in Hollywood because of her stance. So, 1MM would like her to know that we appreciate her faithfulness and encourage her to remain strong.

Candace Cameron Bure is taking the heat for telling The Wall Street Journal that she left Hallmark to work with Great American Family because this budding cable channel keeps Christianity, including “traditional marriage,” central in its family-oriented films. In Bure’s interview, the mom of three also mentioned that she doesn’t expect Great American Family to follow Hallmark’s lead in featuring same-sex couples.

Bure, known for her role as DJ Tanner on the television sitcom Full House, has starred in 30 Hallmark movies, 10 of which were Christmas films. She announced last April that she was leaving Hallmark Media to develop, produce, and star in projects for a new, traditional, family-oriented network. The new network is an upstart cable channel positioning itself as the God-and-country alternative for holiday entertainment.

Great American Family is featuring 18 original Christmas movies this holiday season as part of what it hopes to become an annual “Great American Christmas” event.

After leadership changes at Hallmark Channel, Bure recently moved to this new network, Great American Family, to turn over a new leaf and be a part of films with a more faith-centric focus.

“[Hallmark] is basically a completely different network than when I started because of the change of leadership,” she told Wall Street Journal. Bure’s comments, which drew ridicule from some in the entertainment industry, came as Hallmark prepared to break new ground with its first-ever movie featuring a same-sex storyline as the focus of its plot.

“My heart wants to tell stories that have more meaning and purpose and depth behind them.” Bure added, “I knew that the people behind Great American Family were Christians that love the Lord and wanted to promote faith programming and good family entertainment.”

Great American Family is available on major cable and satellite outlets and streaming platforms such as FRNDLY TV.

Due to her stance, Bure has recently been under attack in the media, particularly on social media. Bure attempted to diffuse the angry mob with a lengthy statement, calling out the media for generating outrage and attempting to “assassinate [her] character.”

In her comments, she reiterated, “I am a devoted Christian, which means that I believe every human being bears the image of God. Because of that, I am called to love all people, and I do. If you know me, you know that I am a person who loves fiercely and indiscriminately. My heart yearns to build bridges and bring people one step closer to God, to love others well, and to simply be a reflection of God’s huge love for all of us.”

Thankfully, Bure isn’t without her conservative fans, supporters, and family. Despite the intolerance from her attackers, Bure’s eldest daughter, Natasha, supported her mom via Instagram with a statement of her own:

The media is an absolutely vile space for negativity, and I applaud you every time for how you handle yourself with the utmost grace. As they continuously twist the narrative to beat down on the Kingdom, you stand firm in faith and never let others dim your light for Him. No matter how out of context or warped the words may get, the enemy will not prevail. Society has gotten completely out of hand with believing every strategically worded headline broadcasted by the media … followed by cancel culture, which is nothing but ugly. It is so incredibly sad to watch. I am lucky to get to view you from a lens closer than most and see how you are truly the real deal. The Lord shines through you, time and time again. The battle is His.

Hallmark is bad news and has been for several years now. 1MM is thankful Bure is not intimidated by the large corporation.

Let us thank Bure for not caving under pressure and not backing down to an agenda that does not have families’ best interest in mind, but instead, standing up for what is right and for her moral beliefs.

Sign our petition, provided here on our website, thanking our friend and sister in Christ, Candace Cameron Bure, for her leadership in protecting families by not cowering to the pressure Hallmark placed on her. Don’t forget to forward this information by email or social media to your family and friends today.