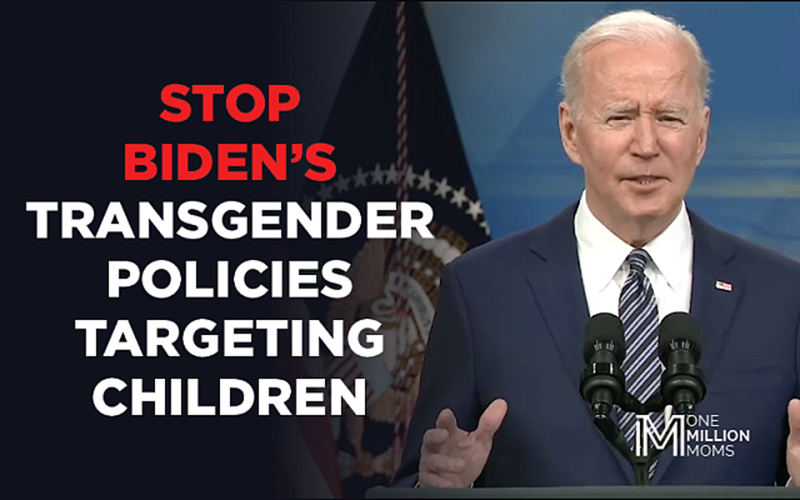 Biden even went so far as to invoke God as a co-conspirator in the approval of child abuse through government sanctioned sex-change operations. In a video celebrating Transgender Day of Visibility just a few days ago, Biden said he sees transgenders “for who you are, made in the image of God.”

In conjunction with recent policies released by the president’s Health and Human Services (HHS) department, Biden said, “We’re committed to advancing transgender equality in the classroom, on the playing field, at work, in our military, in our housing and health care systems – everywhere. Simply everywhere.”

Urge your senators and representative to step-up, speak out and act against Biden's new policy to sexualize and mutilate young people in accordance with transgender ideology.

The HHS documents describe what it calls appropriate treatments for transgender adolescents, including: "'Top' surgery – to create male-typical chest shape or enhance breasts;" and "'Bottom' surgery – surgery on genitals or reproductive organs, facial feminization or other procedures."

In other words, the Biden administration condones the practice of body mutilation, even for children.

Continuing this confused state of gender reality, Biden promised to fight and oppose recently adopted state laws that rightfully protect women’s sports by not allowing males to compete on women’s teams in schools and universities. Biden said these commonsense laws to protect women are “simply wrong” and “hateful.”

I could go on, but I think you get the idea. The president is taking our nation, and more importantly, children down a dangerous path that will lead to more mental confusion and more self-destruction.

What’s also concerning to me is the silence of many of our elected officials in Washington, D.C. Why aren’t senators and representatives publicly opposing Biden’s radical and dangerous transgender agenda? While a few have spoken out, not nearly enough are representing their constituents back home. They must do more to stop this progressive White House.

Urge your senators and representative to step up, speak out and act against Biden’s new policy to sexualize and mutilate children in accordance with transgender ideology.