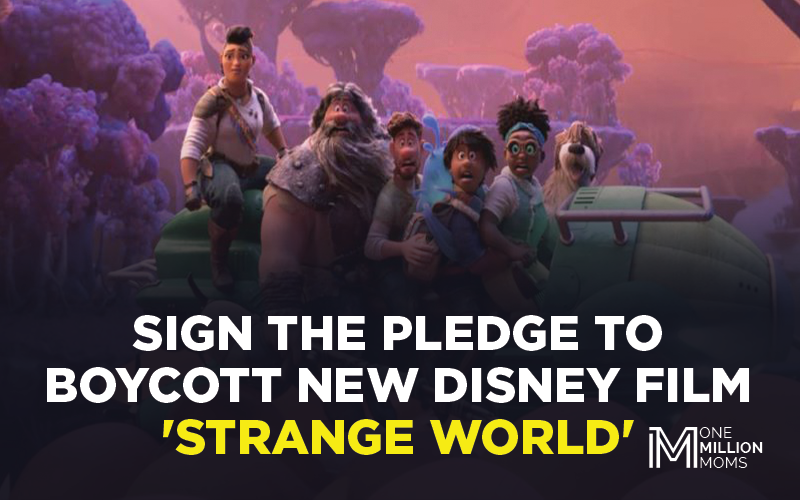 One Million Moms needs your help to make sure as many people as possible are aware of Disney pushing the LGBTQ agenda on families, particularly children, in the upcoming animated movie Strange World, set to hit theaters on Wednesday, November 23.

Disney is no longer being discrete, but now Disney has traded its subtlety for intentionality.

Strange World is a film about a family of explorers traveling to a new and bizarre land.

In one scene, the character Ethan flirts with a boy named Diazo in front of his friends, who tease him in a friendly and warm-hearted way.

His father, Searcher Clade, later joins in and embarrasses him in “an overeager show of acceptance,” according to a scene description by Variety.

The scene portrays the son as being very shy in front of his boy crush, and his dad comes in and says, “So nice to meet you! My son talks about you all the time,” further embarrassing his son.

Obviously, this part of the movie is a nod to inclusivity, along with a blatant attempt by Disney to normalize a same-sex crush.

CBN News reported that right after Florida passed its controversial Parental Rights in Education Act in late March, Disney CEO Bob Chapek promised to be “a better ally for the LGBTQ+ community.” Likewise, Karey Burke, president of general entertainment for Disney, declared that she hoped to see “many, many, many LGBTQIA characters” in all genres of Disney entertainment.

The Disney that parents knew as children is long gone. Disney has now decided to be politically correct instead of providing family-friendly programming. But Disney should stick to entertaining, not pushing an agenda.

Please share this with your friends and family to make sure they are aware of the gay teen romance in Strange World and are not blindsided by it. As moms, we all want to know when Disney is attempting to desensitize our children by normalizing the LGBTQ lifestyle.

I encourage you to join us in telling Walt Disney Animation Studios that we are not buying what they are selling.

Sign our pledge and commit to boycotting the new movie, ‘Strange World.’

After you sign the pledge, please share this alert via email and on your social media pages. Help us spread the truth about this Disney film today!