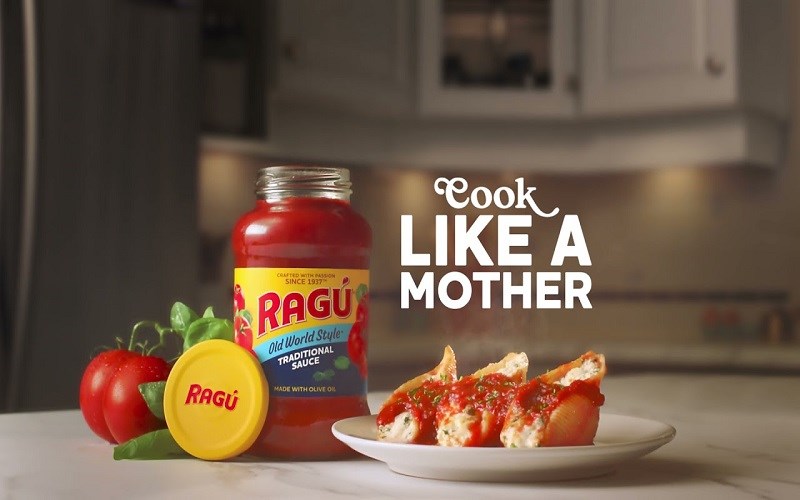 In one of the newest Ragu commercials, male and female firefighters are depicted in a firehouse, hungrily asking who is doing the cooking today. One firefighter says “Rodriguez.” The other firefighters become excited because Rodriguez “cooks like a mother.”

Unfortunately, this tagline is repeated several times as part of Ragu's “Cook Like a Mother" campaign.

In previous versions of this same marketing campaign, the Ragu commercial begins with a bridge club comprised of mature women sitting around a dining table playing cards. One grandmother blurts out that this will have to be her last hand of cards because her granddaughter Krissy is having her over for dinner. In disbelief, another woman asks, “Krissy cooks?” The grandmother confirms with a smile that Krissy “cooks like a mother.” In a questioning tone, the other woman repeats the offensive tagline. Again, the grandmother agrees that Krissy does indeed “cook like a mother.”

Through this new ad campaign, Ragu, owned by Mizkan, is promoting their products in a manner that parents find shocking. Why is this “family” oriented company running an ad for their sauce with the phrase “cook like a mother?” In today’s jargon, viewers know full well that this tasteless phrase is a euphemism for “cook Like a mother f*#ker!”

Ragu’s new “Cook Like a Mother” commercials are not only offensive but also irresponsible because of the impact on impressionable children who will be viewing the ad. Perhaps Ragu thought this was a humorous commercial, but it is not cute for children to recite this tagline. And we all know children repeat what they hear. Does Ragu desire for our children to have dirty mouths?

This is not the first time Ragu has aired an offensive commercial.

In 2012, Ragu aired an ad in which a young boy caught his parents in the act and walked away in shock. The parents then gave him a plateful of spaghetti to calm him down. Was Ragu spaghetti sauce supposed to make him feel better or restore his innocence? Of course not, but it was all part of Ragu’s “Long Day of Childhood Calls for America’s Favorite Pasta Sauce” campaign.

Once again, Ragu has made a deliberate decision to produce controversial advertisements instead of wholesome ones. One Million Moms finds this highly inappropriate.

What’s worse, Ragu’s advertisements air during primetime when families are most likely to be watching. How damaging and destructive to children! Ragu should be more responsible in their marketing decisions.

Let them know that as a parent and a consumer you are disgusted by their recent marketing choices.

Ragu needs to know parents do not approve!

If you agree that this marketing campaign is inappropriate, please sign our petition urging Ragu (Mizkan) to cancel these commercials immediately.